In November of 1993, the National Association of Manufacturers (NAM) released NAFTA We Need It, a collection of anecdotes from more than 250 companies describing how they would create U.S. jobs and face improved business prospects if Congress passed the North American Free Trade Agreement (NAFTA). As NAM President Jerry Jasinowski proclaimed in the report's forward: "U.S. companies are publicly sharing information on their market prospects in Mexico -- information normally considered 'company proprietary' and jealously guarded from the competition...They are doing so to convince Congress to approve the pact. These anecdotes...clearly illustrate how important the Mexican and other foreign markets are to U.S. companies and U.S. jobs."(1) Three years after NAFTA went into effect, Public Citizen's Global Trade Watch examined the specific promises contained in the NAM's report and other pro-NAFTA business and government reports and congressional testimony to determine whether NAFTA has actually created the U.S. jobs that its proponents promised. By tracking the performance outcomes of specific job creation and export expansion promises of businesses and industry organizations, this report documents a broad sample of NAFTAs real life results. As leading promoters of NAFTA, the firms surveyed for this report were the most likely to embody the promised benefits of NAFTA. This report reveals how the real life experiences of these pro-NAFTA companies three years into NAFTA now embody a very different story -- one which shows that NAFTA is not working. New U.S. jobs are not being created by NAFTA and NAFTA is causing major U.S. job loss. Despite NAFTA's three year record, many of NAFTA's original industry and political boosters are now urging an immediate expansion of NAFTA to additional countries in the Americas. Any prudent consideration of NAFTA's future must be based on the real life evidence of NAFTA's actual performance. With this study, Public Citizen demands: "Show Us the New NAFTA Jobs!" Recently, NAFTA's proponents have made weak attempts to use new statistical models to demonstrate NAFTA job creation. However, repeated inquiries to the Department of Commerce and our own studies have failed to uncover more than a few hundred actual new jobs attributable to NAFTA. These jobs stand in stark contrast to the NAFTA job loss reported by the NAFTA TAA program, which itself is a fraction of the actual NAFTA job loss. This study attempts to get past the phantom jobs NAFTA's defenders claim (using their economic models) and to look for the specific jobs created by NAFTA. 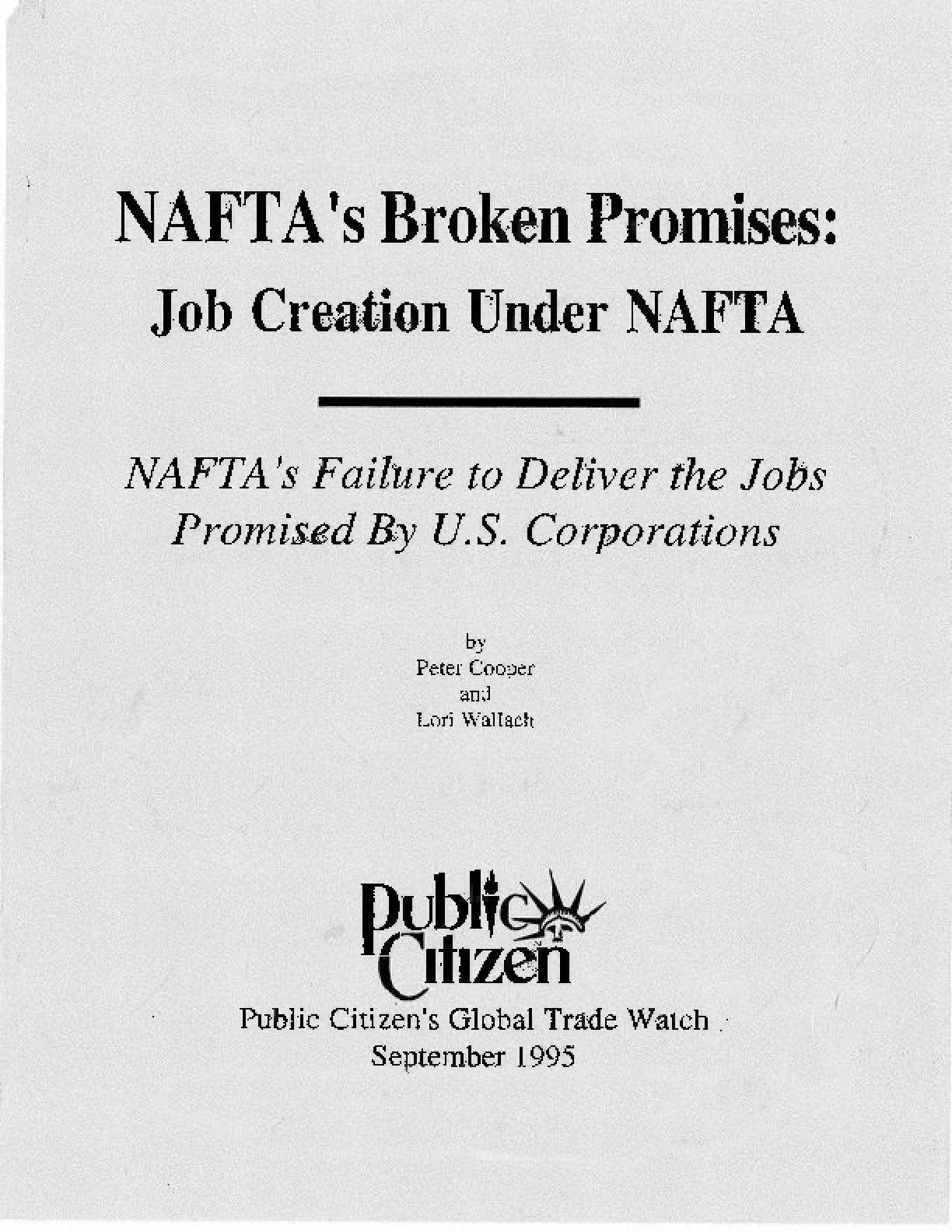